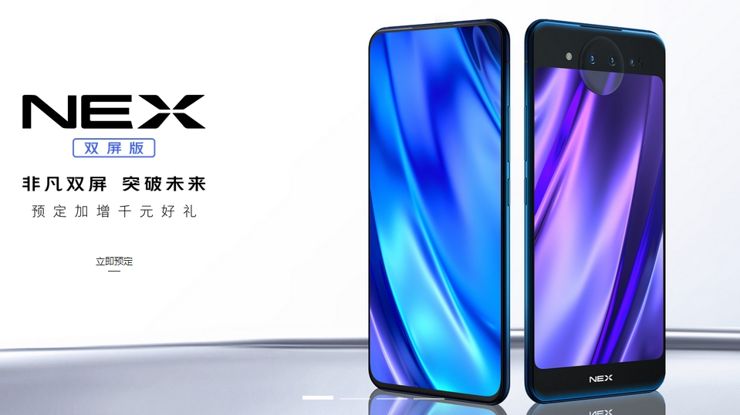 Vivo unveiled an impressive Vivo NEX Dual Display smartphone in China. Its name explains a lot - it's a two-screen model that we've known so far as Vivo NEX 2.

Vivo NEX Dual Display ( also appearing as Vivo NEX Dual Screen) is an atypical smartphone, full of interesting solutions, with a strong specification. Let's start with screens - both were made in Super AMOLED technology. The main one measures 6.39 inches, has a resolution of 1080 x 2340 pixels and a side ratio of 19.5: 9. According to the manufacturer, it occupies 91.63% of the front of the device. The second, rear screen is slightly smaller - it has 5.49 inches, 16: 9 aspect ratio and Full HD resolution.

In the middle - without major surprises - we have Snapdragon 845, 10 GB of RAM and 128 GB of internal memory, unfortunately without the possibility of expanding with a card. The front screen has a fingerprint reader, while on the other side you can use the 3D face recognition system. Interestingly - the rear screen can act as a touchpad - separate for the right and left hands. This can be useful in games. A characteristic ring on the back panel - it's just an extra, slightly protruding glass, covering the two main lenses of the camera and a part of the screen under them, performing some functions as an auxiliary interface.

And since we talk about the cameras - they are only on one side, in the back. The front camera is no longer needed, because the selfie preview is on the display under the camera. The main camera has 12 megapixels, optical stabilization (OIS) and lens with f/1.79 aperture. The next camera has 2 megapixels, f/1.8 lens and it was described as "night vision". Another lens - a 3D TOF sensor (time of flight) - a 3D image scanner. It mainly deals with face recognition, but also supports beautifying. It is dealt with by AI artificial intelligence, which also supports all other photographic modes.