Motorola One Vision - the first such Moto 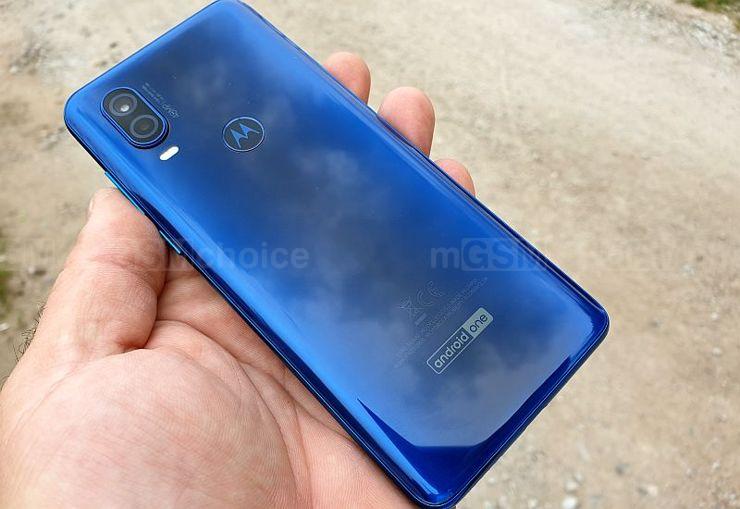 Motorola presented the One Vision model today. This is a unique smartphone in the history of this brand. This is the first Motorola with an Exynos processor and the first with a 21: 9 screen cinema.

The extended screen and atypical (for Motorola) processor are not the only features that make One Vision stand out. The smartphone also has a selfie camera in the hole in the corner of the screen, a double camera at the back and an interesting finish of the casing. It comes in two colours - blue and brown. The back is interestingly shimmering and the eye enjoys the glass rounded along all the edges. The screen covers the Gorilla Glass 3, while the sensitive interior is protected by an IP 52 hydrophobic coating, so the smartphone should survive accidental wetting (but it's better not to dive with it...).

Time for a handful of data. The IPS screen in Motorola One Vision has a diagonal of 6.3 inches and a resolution of 1080x2520 pixels, which translates into a density factor of 432 ppi. The heart of the phone is the octa-core Samsung Exynos 9609 processor clocked at 2.2 GHz, juxtaposed with 4 GB of RAM and the graphics system Mali-G72 MP3. The internal memory can hold 128 GB and can be expanded with a 256 GB microSD card. There is a 3500 mAh battery with a fast 15 W charging - an appropriate power supply, of course, was added to the set. Already 15 minutes of TurboPower charging will provide energy for the next 7 hours of phone operation. The smartphone supports LTE category 6, it also has dual band Wi-Fi and Bluetooth 5.0 as well as NFC. There are GPS, Glonass, Beidou and Galileo navigation. The equipment also includes an FM radio and Dolby Audio sound system. One Vision has a USB-C and a minijack port as well as a fingerprint reader.

As I mentioned before, the front camera was mounted in the corner of the screen, in a hole with a diameter of approximately 5-6 mm. This camera has 25 megapixels with a size of 0.9 micrometres and a lens with f/2.0 aperture. In low light, however, you can combine adjacent pixels into one larger, 1.8-micrometer, producing a less noisy, sharper and brighter photo at the expense of reducing its format to 6 megapixels.

This technology, called the Quad Pixel, can also be found in the main rear camera. Its main 48-megapixel sensor can also connect neighboring pixels to a larger, 1.6-micrometer to capture more light with a f/1.7 aperture and give a better but 12-megapixel image. Photographing and filming support optical image stabilization, rare in this class of smartphones, especially when combined with the Quad Pixel solution. The rear camera has an additional matrix of 5 Mpx, which domain is blurred background - but not only.

The software also allows you to cut out the foreground character and apply it to another background or illuminate the person portrayed with simulated studio light - there are several different options to choose from. You can also use the "spot colour" and highlight only the elements of the selected colour, or create a moving picture, animating only the elements indicated by us. In One Vision, a special night mode has been added that allows you to record a lot of details in a dark environment, while reducing unnecessary flashes of light. The artificial intelligence of the camera will also tell you how to get the optimal frame by registering two pictures - one with correction and the other one that we have set ourselves. The camera saves movies in 4K at 30 fps or in Full HD at 60 fps, and records 240 fps in slow motion.

Motorola One Vision belongs to the Android One program - it is therefore a phone with a clean system and a promise of regular, frequent updates. There arre, however, Motorola accessories - notifications on a blanked screen, or smart gestures, allowing you to quickly launch a flashlight, a camera or take a screenshot. Motorola One Vision measures 160.1x71,2x8.7 mm and weighs 180 g.

A little bit perversely, at the end I left a note that probably interests you the most. Motorola One Vision costs 299 euro. The price seems to be attractive, compared to what the model offers. One Vision tempts primarily with a 21: 9 cinema screen and a decent camera. On the side of the advantages we can also count a large internal memory and modern stylization. What a bit worries me is the average amount of RAM and the capacity of the battery - which, however, only slightly is compensated with a quick charging. You can also enjoy the presence of microSD and minijack sockets and count on the good cooperation of a clean system with the Samsung processor. If it's enough for you, you can find Motorola One Vision in Euro and Play stores - at least at the beginning.