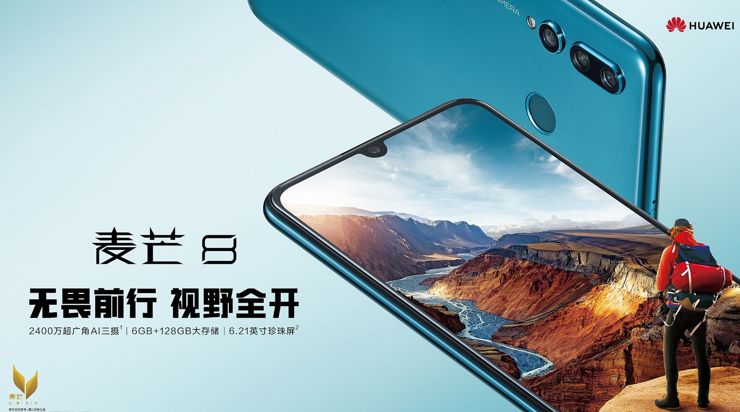 As announced, Huawei Maimang 8 made its debut today in China, being the local equivalent of Huawei P Smart+ 2019.

Huawei Maimang 8 has a screen with droplet notech and diagonal 6,21 inches and a Full HD+ resolution (415 ppi). The heart of the smartphone is the octa-core Kirin 710 processor (4xCortex A73 2.2 GHz + 4xCortex A53 1.7 GHz), and the internal memory can be enlarged with a microSD card with a maximum of 512 GB. Power is provided with a 3400 mAh battery, and as the system we have Android Pie with an EMUI 9 overlay.

Huawei Maimang 8 is equipped with an 8-megapixel camera for selfies and a triple camera at the back. The main matrix has 24 megapixels, and the additional matrix for blurring the background - 2. Between them there is also a 16 Mpx matrix with a wide-angle lens. There are all necessary communication interfaces (including a minijack), but there is no NFC, and the system socket is of the older type - microUSB. The fingerprint reader is classic and placed at the back.