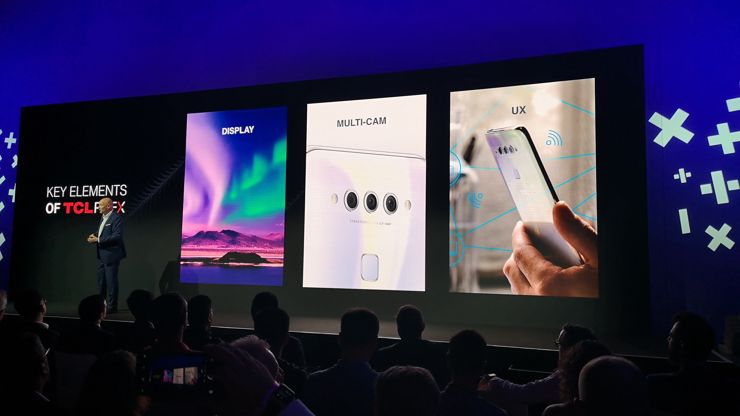 During the International Consumer Electronics Fair in Berlin TCL Communication, the company to which Alcatel and BlackBerry belong, presented its first global smartphone manufactured under the TCL brand. Meet TCL PLEX.

The producer was waiting for the right moment to launch its smartphone, taking into account the increasing number of video recordings and photos taken and viewed on the phone. TCL PLEX is to offer great screens, a friendly interface and many cameras. The screen of the PLEX model is 6.53 inches Full HD+. The smartphone is also equipped with a maximum of 6 GB of RAM and up to 128 GB of internal memory. A triple camera in which the main sensor has 48 megapixels is responsible for the photos. There is also a camera with a wide angle, there was also the possibility of recording video in slow-motion at 960 frames per second. The housing is covered with a glass layer with a holographic finish. TCL PLEX will go on sale in two versions: black and white, for a price starting at 329 euro.

We also saw new solutions in the field of mobile bent devices, which will have their market debut in 2020. The new bent concepts of TCL smartphones will also introduce a completely new ButterflyHinge folding system that will complement DragonHinge's proprietary technology. TCL also showed a completely new category of devices - a wearable screen called Project Archery, which will offer the user the impression of communing with a 100-inch screen in a form similar to sunglasses.

AI x IoT is a new global strategy of TCL which is to introduce and connect a number of intelligent devices. TCL focuses on high resolution 8K screens with excellent colours provided by QLED technology and high contrast, which will ensure Mini LED technology. The manufacturer will also offer a new series of Mini LED TVs and the X series, in which models will be offered that provide true 8K resolution. Smart TVs will be equipped with 4K cameras, which will allow you to make video calls or play titles using AR. They also have an additional screen with information about the materials being played and a soundbar with ONKYO speaker with Dolby Atmos and 360-degree sound. The smart functions of the TV will be managed by the TCL AI-IN platform. The X series will be available in three sizes: 65, 75 and 85 inches.

TCL has shown a whole range of products
Jolanta Szczepaniak/GSMchoice.com

TCL soundbars from the TS5 and TS7 series and the innovative Ray-Danz soundbar are also to appear in Europe. We also saw the new SOCL500TWS and ACTV500TWS wireless headphones.