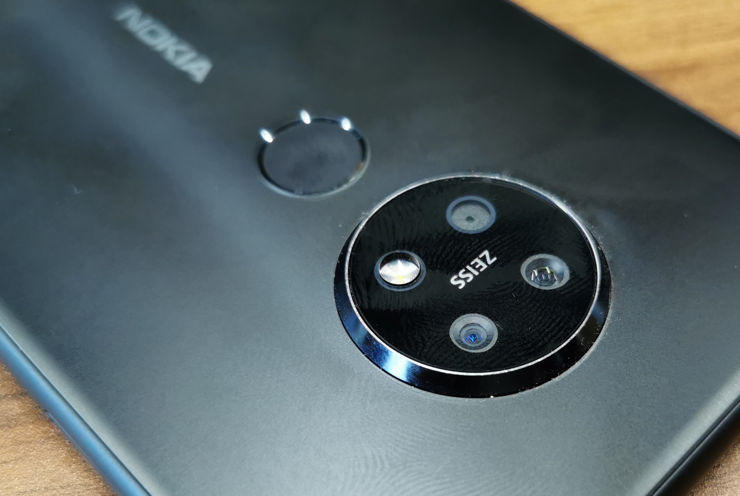 Nokia 7.2 is the only model with Zeiss optics at this year's IFA. The smartphone seems confusingly similar to the Nokia 6.2 model, but there are a few notable differences.

Yes, the PureView screen is also present here and very much like in Nokia 6.2 positively affects the video viewing experience. Some regret is the fact that only in the highest model the manufacturer decided to use the well-known optical brand and their lenses, but after a short reflection, it is easy to see that it had to be about the price. The whole photographic module has the same construction as in 6.2 - it is also three lenses placed on a round black panel with the LED diode and a silver bezel around. Here, however, a 1/2" matrix with a resolution of 48 Mpx and intelligent software combining information from four adjacent pixels were used to obtain a well-lit image with a resolution of 12 Mpx.

The technology has long been present on the mobile market, but it is always interesting how it was implemented in smartphones of a given brand. We have a chance for nice photos in poor lighting conditions; it's nice to enjoy. Other rear cameras are 8 Mpx with wide angle and 5 Mpx for measuring depth. In the front we have a difference from Nokia 6.2 - a camera with 20 Mpx matrix placed in a droplet notch.

And again this notch!

PureView technology is cool, but notch is not cool. The display has a 6.3" diagonal and works in FHD+ resolution. The glass both on the display and on the back of the housing is Corning Gorilla 3. The frame is a special composite, 2 times stronger than a standard polycarbonate. The screen is bright and has a satisfactory contrast. The parameters of the viewed image actually go up when you activate PureView processing in the upper tray.

The higher model is a better processor. In this case, performance increases little, but Snapdragon 660 makes a difference. The set includes 4/6 GB of RAM and 64 or 128 GB of flash memory. Although the originally installed system is Android 9.0 Pie, but the manufacturer promises that the smartphone is Android 10 ready, so a decent update is planned in the future.

The battery has a capacity of 3500 mAh and supports charging of 10 W. For the willing ones there is an FM radio that requires connecting headphones as an antenna, a jack socket so that these headphones can be connected and the aptX standard. There is also an NFC interface and notification LEDs.

Nokia 7.2has a slightly better processor and definitely better photographic capabilities. Optically, it also differs from the Nokia 6.2 matt surface of the back cover. After a short contact, I can say that the smartphone lies well in the hand, and pure Android works without jams. Aesthetically, it is impeccable, but it's always a matter of taste. Nokia 7.2 will appear with a Google One subscription - which means 100 GB free for 3 months - to continue it will have to be extended by paying. Google Podcast is also included in the package.