Asus Zenfone 6 means freedom of photography and a large battery 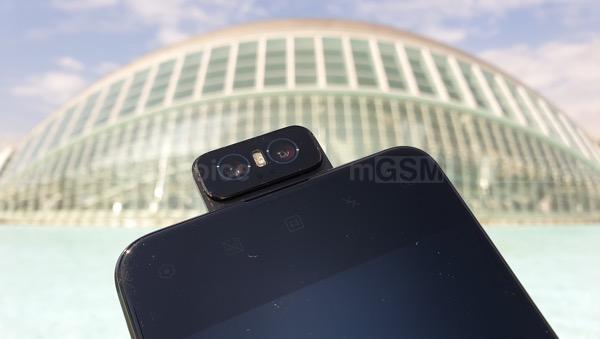 Asus presented the Zenfone 6 model in Valencia today. The phone tempts with an interesting camera, a powerful processor and a capacious battery - all of this is given at a really reasonable price.

The most prominent feature of Asus Zenfone 6 is an unusually solved camera, which simultaneously solves two problems: a notch on the display and low resolution of the front camera. The rotated photographic module includes a main camera with a Sony IMX586 sensor with a resolution of 48 Mpx f/1.79 (with Quad Bayer technology for better night shots) and a wide-angle 13 megapixel camera with a 125 degree angle of view.

The camera module is driven by a stepper motor that rotates it by full 180 degrees to move the camera forward. It can also be used in any intermediate position, which ensures users a smooth positioning and the ability to take photos from virtually any position.

In a special Free Angle mode the camera can be set at any angle, which gives the users the freedom to frame their objects from a sharp or flat angle without having to take unnatural positions. There are several unusual shooting modes available, including Auto Panorama for automatic panoramic shooting, as well as Motion Tracking to track an object while recording movies - the camera follows the indicated frame element.

There are also HDR+ Enhanced and Super Night modes. The flip photo module is made of liquid metal (amorphous alloy) - a material that is 20% lighter than stainless steel, and at the same time four times stronger than it. The sensor G integrated in the module detects the acceleration rate, so that the camera automatically returns to a safe position in the event of a phone failure. Module lifetime has been calculated for 100,000 cycles.

Asus Zenfone 6 is equipped with a 6.4-inch IPS Full HD+ NanoEdge screen with a narrow frame, which has a screen-to-housing ratio of 92%. The display features 100% coverage of the DCI-P3 colour space and a brightness of up to 600 nits. Protection is provided by the Corning Gorilla Glass 6. ZenFone 6 is powered by an eight-core Qualcomm Snapdragon 855 processor with a clock rate of 2.8 GHz, while a 5000 mAh battery offers up to two days of operation (according to the manufacturer). The set includes a fast 18 W power supply. The smartphone has, of course, LTE, Bluetooth 5.0, NFC or dual-band Wi-Fi. There is also an FM radio, DTS: X and stereo sound system (also a headphone speaker) powered by NXP TFA9874 amplifiers. There are three memory variants available - 6+64, 6+128 and 8+256 GB. Their prices are respectively 499, 559 and 599 euro. The internal memory can be enlarged by a 2 TB microSD card, and regardless of this, you can use two nanoSIM cards.

The new ZenUI 6 user interface is simple and convenient to use even for people using the ZenFone smartphone for the first time. It is characterized by an orderly and transparent design with only the most important functions - close to the raw Android Pie. There is also a new Dark Mode colour scheme that helps reduce eye fatigue when using the phone in poorly lit places. The interface has been enriched with the OptiFlex function, accelerating startup and re-enabling applications, as well as saving energy in standby mode, memorizing your favorite user applications. This feature retains the most-used applications in the phone's memory, making them always ready for use.

In the new Private Listening mode, all voice messages and interactions with Google Assistant are only played through the handset so that no messages will be heard by others in public places. Speaking of headphones, the ZenEar Pro model is included - in-ear headphones tuned by the renowned specialist audio company - 1MORE. A nice addition to the phone's capabilities is an additional Smart Key on the side of the casing.

It can be personalized to perform frequently used commands, including tasks in Google Assistant. It recognizes single-press, double-tap or press-and-hold modes that can be assigned to different activities. Asus Zenfone 6 is now available for pre-sale, and stores will arrive on May 25.