The launch of the Huawei Mate 30 family 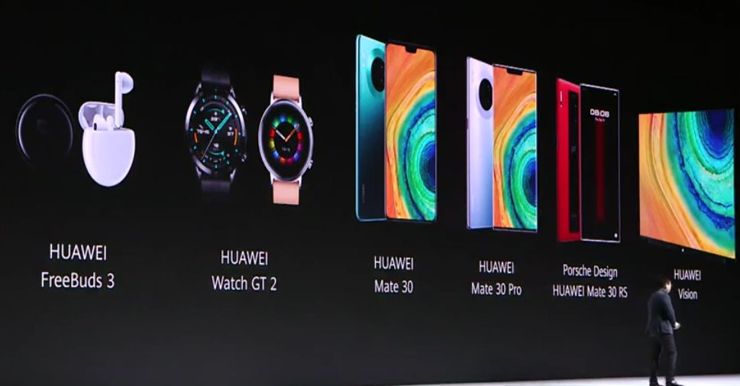 Models from the Huawei Mate 30 family are the first models, with the new Kirin 990 processor. The smartphones are enclosed in housings with a metal frame, meeting the requirements of IP68 or IP53 (in Mate 30), and available in several colours. Huawei is also introducing new material, optionally covering the back of the phone. It's called Vegan Leather and provides a pleasant and secure touch, as well as resistance to breakage.

In both models, the internal memory can be expanded with a card, but in the nanoSD (vel nano memory) standard, promoted so far only by Huawei. Smartphones use Android 10 with the EMUI 10 interface, both also have a new fast charging system - 40 W wired and 27 W wireless. Reverse loading has also been accelerated.

Huawei Mate 30 has a screen with a diagonal of 6.62 inches and resolution Full HD+. A small notch was cut out on the screen to accommodate a 24 Mpx selfie camera with f/2.0 lens and face recognition sensors. Huawei Mate 30 can have 6 or 8 GB of RAM, as well as 128 GB of internal memory, which can be expanded with a nanoSD card.

Huawei Mate 30 Pro is offered with 8 GB of RAM and 128 or 256 GB of internal memory - naturally, with the option of using a nanoSD card. The Horizon Display makes quite an impression, covering almost half of the side walls of the phone. The display is of course AMOLED with a fingerprint reader as well as a loudspeaker. On the sides of the screens there are touch panels that replaced the traditional volume control buttons. A camera shutter key has also been added there.

The display has a diameter of 6.53 inches and a resolution of 2400x1176 pixels, but at the same time it is equipped with a substantial notch. This indentation is necessary because it houses not only the selfie camera (32 Mpx, f/2.0), but also the face recognition system with 3D sensors, light and proximity sensors, as well as a separate sensor that detects gestures that can be used for the interface. The 4500 mAh battery is responsible for the power supply. Huawei Mate 30 Pro supports 5G connectivity in up to five bands, having 21 antennas, 14 of which are dedicated exclusively to 5G.

The model range will be completed by Huawei Mate 30 RS Porsche Design, available in two colours, with the back finished in leather and a slightly different stylization. Interestingly, a cover with a detachable strap that can act as a support is offered for this model. Technically, it is the same model as Huawei Mate 30 Pro, but with 12 GB RAM and 512 GB flash. In addition, despite the IP68 water resistance, its contact with water is not recommended due to the properties of natural leather on the back of the housing. The price is only 2095 euro.

Huawei also presented a new version of its smartwatch. Huawei Watch GT 2 comes in two sizes (42 and 46 mm) and is equipped with a 1.39-inch AMOLED display with a resolution of 454x454 pixels. The heart of the watch is the Kirin A1 system, with advanced sound processing systems, Bluetooth connectivity management and low energy demand. The watch has a built-in music player and supports voice calls. It also recognizes 15 sports activities and is waterproof up to 50 m. The battery should provide the watch with up to 2 weeks of operation. Prices start from 229 euro.

The presentation of the novelties is crowned with the launch of the Huawei Vision TV with ten speakers, image refreshment at 120 Hz and 4K resolution. Equipped with a touch remote control and hub for the Internet of Things, the receiver is available in 55, 67 and 75 inch formats.