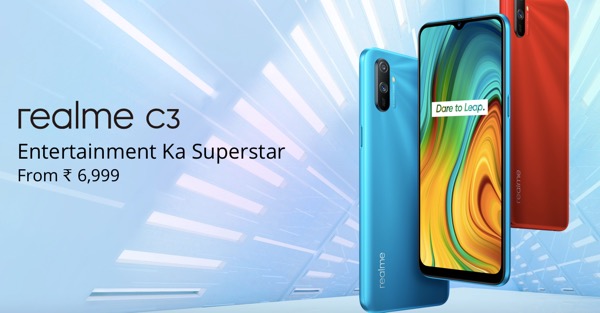 The Realme brand, which belongs to Oppo, presented its new proposal in the budget segment. Realme C3 tempts with two attractive housing colours and an interesting design at the back.

The smartphone is offered in red or blue, and the back is decorated with a radial pattern that extends around the camera frame. The said camera is double, has 12 and 2 Mpx matrices and f/1.8 and f/2.4 apertures. The heart of the phone is the Mediatek Helio G70 processor, paired with 3 or 4 GB LPDDR4X RAM memory and 32 or 64 GB flash media. In addition, it is possible to expand the memory with a microSD card while using two SIM cards.

The 6.5-inch LCD screen has HD+ resolution and a droplet notch, hiding a 5-megapixel selfie camera (f/2.4). The smartphone powers a 5000 mAh battery with a reverse charge function, but unfortunately via the microUSB port, not the newer USB-C. The smartphone also has a minijack output and the ability to simultaneously play music via wired headphones and Bluetooth. The phone is offered in India for 7 or 8 thousand rupees, that is 99 or 113 USD.