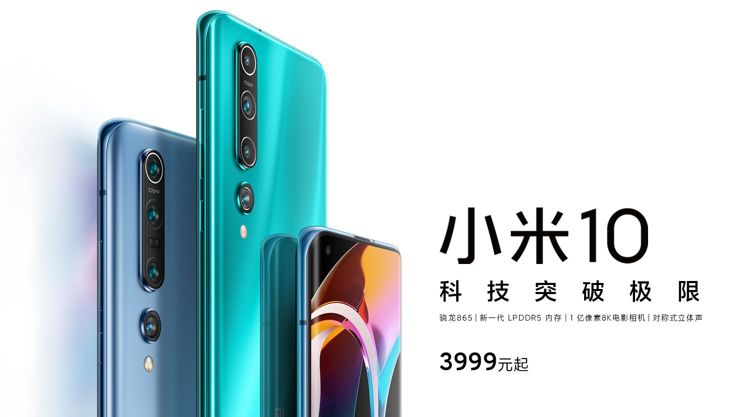 Xiaomi today presented its flagship for this year. It seems that we must slowly start to forget about cheap Xiaomi ... Xiaomi Mi 10 and Xiaomi Mi 10 Pro are more expensive than their predecessors.

Xiaomi Mi 10 and Xiaomi Mi 10 Pro are no longer "budgetary flagships". These are top models in the full sense of the word. Smartphones received AMOLED screens with a 6.67-inch diameter, Full HD+ resolution and a refresh rate of 90 Hz. The screens have rounded edges, support HDR+ and full coverage of the DCI-P3 colour palette, and have very high contrast and brightness (up to 1120 cd/m2). To improve control precision, touch panels are refreshed up to 180 Hz, and we also have fingerprint readers under the screens.

The most important information
photo: Xiaomi

Both models use top Qualcomm Snapdragon 865 processors, with cooling via a steam chamber, and in addition you will be able to buy an overlay - a cover with a fan. The smartphones are equipped with fast LPDDR5 and UFS 3.0 memories, of course there are also 5G SA/NSA and Wi-Fi 6 modems as well as Dual GPS, Dual GPS or NFC. Smartphones have stereo speakers and 20-megapixel selfie devices in the screen openings.

Xiaomi Mi 10 i Xiaomi Mi 10 Pro have 108-megapixel cameras, with optical stabilization, f/1.69 aperture and 1/1.33" size matrixes from Samsung. Of course, single pixels of 0.8 micrometer merge into four ultra-pixel 1, 6 micrometers to give better lit 27-megapixel photos. Smartphones also have 2-megapixel macro cameras at the back (f/2.4) and wide-angle cameras with a 123-degree field of view. In Mi 10 this camera has 13 megapixels and an aperture of f/2.4, while in the Pro -20, with an f/2.2 aperture. Smartphones also differ in the presence of a telephoto camera lens. Xiaomi Mi 10 Pro has two additional modules 12 and 8 Mpx with f/2.0 apertures. One gives a 2-fold zoom, and the second - lossless 5x and hybrid 10x. Both Mi 10 record movies in 8K resolution at 30 fps. Cameras gained the highest rating in the DxO Mark ranking: 124 points.

The last of the differences between the new models are the memory version, and thus - and prices:

It is not known yet when the new Mi 10 will appear outside of China. Their world debut was planned for this year's MWC, but in the face of their cancellation, it will probably be postponed...(UPDATE: Xiaomi officially confirms that the conference planned for Barcelona on February 23, will not take place. The new date and location will be announced later.)
Xiaomi Mi 10 i Xiaomi Mi 10 Pro
photo: Xiaomi
Cooling attachment for 129 yuan.
photo: Xiaomi