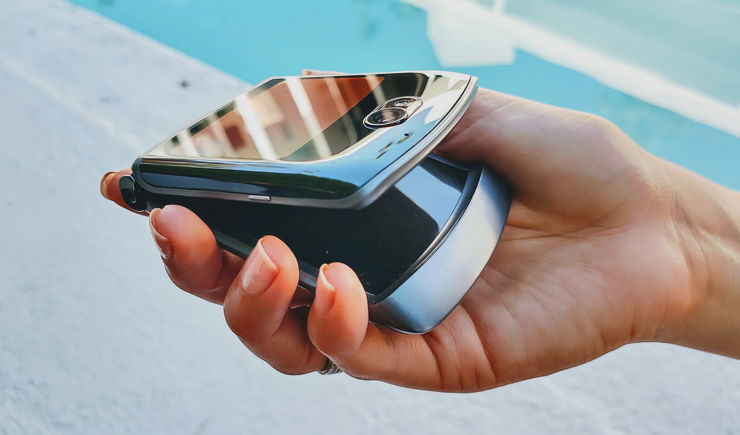 The new Motorola RAZR 5G is distinguished by many elements, but it is the iconic appearance and potential of the foldable housing that can make the buyers interested in the smartphone and change the way they interact with the phone. Or at least that's what Motorola claims, which officially presented the RAZR 5G model, the second installment of the foldable, innovative smartphone.

The new generation of the Motorola RAZR folding smartphone is a product that you will choose not because of its strong specification or cameras - it is a smartphone that you will choose because of its originality, innovation and design. How much has changed in it compared to the previous RAZR model? First of all, 5G network support has been added, the design has been refined, the hinge has been improved, the battery has been enlarged, the functionality of the external display has been increased and the fingerprint scanner has been moved to the rear panel.

Unique appearance - the showcase of the RAZR series

The basic element that distinguishes RAZR 5G on the market is its appearance. This was the case when this model debuted in its first, original and iconic form on the market (let us add that it was 2004), and it is also now, in the case of the latest installment of the series.

Motorola RAZR 5G has a deceptively simple design, with a tapered chin, a single speaker on the bottom edge, a fingerprint sensor on the back, and an improved hinge that makes it easy to use the smartphone with one hand and leaves the slightest gap to protect the internal display. The hinge is to withstand 200,000 folds, which, according to the manufacturer's calculations, would translate into over 5 years of work (assuming from 40 to 100 openings and a smartphone per day). The smartphone is also supposed to be resistant to scratches and splashes - but it is not waterproof. It weighs 192 grams and is only 16 mm thick when folded. To this we add a 6.2-inch pOLED Flex View display with a resolution of 876x2142 pixels and an aspect ratio of 21: 9, polished 3D glass, 7000 series aluminum and three metallic colours, referred to as Polished Graphite, Liquid Mercury and Blush Gold.

The compact device is equipped with two displays, but for many applications you do not need to open the smartphone. Thanks to the external, touch, colour QuickView display with a diagonal of 2.7 inches and a resolution of 800x600 pixels, you can quickly access the most needed functions using gestures:

The Quick View display is to be the element that distinguishes Motorola RAZR 5G from other foldable phones on the market.


The most advanced selector camera

Without opening the smartphone, the user can take a selfie using a 48-megapixel camera with OIS, laser autofocus and ToF sensor, which provides a 1/2.25 "sensor and a lens with f/1.7 brightness. It combines four pixels into one, in practice providing 12-megapixel photos Moreover, it can record video in the maximum 4K quality.

This is not the only camera in Motorola RAZR 5G - after opening the smartphone, we get access to a 20-megapixel camera with an f/2.2 lens that can be used, for example, for video calls. Both cameras support the face recognition function.

It is worth adding that in the new generation of Motroli RAZR a new version of the camera application has been installed - Camera 3.0, which allows easier access to settings and functions. Above the shutter button are Quick Controls for functions such as zoom, face beautification, flash and self-timer, as well as reorganized and simplified shooting modes. The app will also be available for other Motorola smartphones in the near future.

Modern smartphones can boast with the fifth generation network support - and this feature is not missing in the new RAZR model. The performance of the 5G network is enhanced by the updated chin design that houses two of the four 5G antennas.


Everything is powered by a Qualcomm Snapdragon 765G processor, supported by Adreno 620 graphics, 8 GB of RAM and 256 GB of internal memory (unfortunately not expandable with memory cards). The communication options include support for nano SIM and eSIM cards, a USB-C port (USB 3.1), NFC, Bluetooth 5.0, a dual-band Wi-Fi module and navigation supported by GPS, A-GPS, GLONASS and Galileo systems. There is a single external speaker on the lower edge of the device. The device is controlled by Android 10 and the My UX overlay - a relatively clean version of the Google system, supplemented with several elements of personalization and applications from the Moto range (Moto Display, Moto Actions, Moto Gametime and Moto Audio).

Motorola RAZR 5G is expected to work all day without recharging. Energy is provided here by a battery divided into two parts with a total capacity of 2800 mAh, while its charging is supported by 15W TurboPower technology.

Published: 09.09.2020
By: Jolanta Szczepaniak
This article has no reviews yet. Be first and start the discussion!
Add your opinion!
A D V E R T I S E M E N T