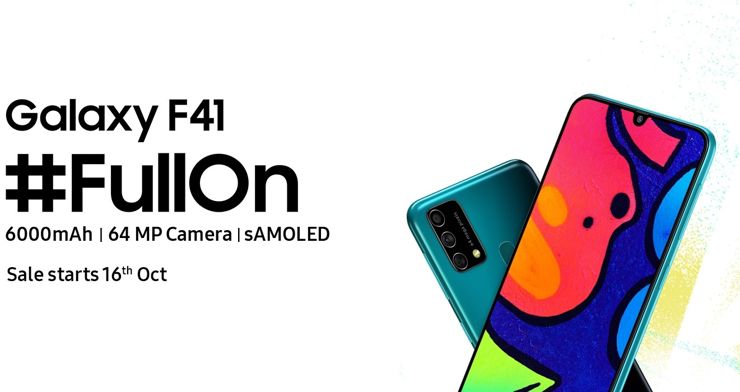 Samsung Galaxy F41 debuted in India today. The smartphone tempts with a large battery and AMOLED display. What else?

Samsung Galaxy F41 is equipped with an AMOLED Infinity U display with a diagonal of 6.4 inches, brightness of 420 nits and Full HD+ resolution. A 32-megapixel selfie camera is mounted in the droplet notch in the screen. The heart of the smartphone is the Exynos 9611 processor, supported by 6 GB of LPDDR4x RAM. The internal memory is 64 or 128 GB, of course there is also a place for a microSD card. The power supply is provided by a solid 6000 mAh battery with a 15 W charging system. Despite the large battery, the phone is not too big. It is 8.9 mm thick and weighs 191 g.

Samsung Galaxy F41 has a triple camera with a main matrix of 64 Mpx and 5 Mpx for blurring the background. Among them there is also an 8-megapixel camera for wide-angle photos - with a field of view of 123 degrees. The equipment is complemented by a classic fingerprint reader, and the system is Android 10 with the OneUI 2.5 interface. It is worth adding that the smartphone has a triple card slot - that is, it allows you to use DualSIM and microSD at the same time.