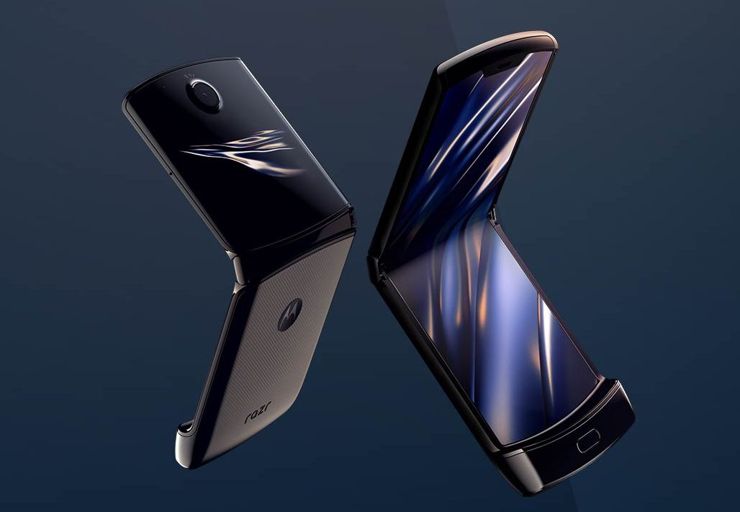 It has happened, Motorola's iconic "Razr" is back. Motorola made a small surprise to the industry and is becoming the second - after Samsung - manufacturer to offer a folding screen smartphone commercially. Here it is: Motorola Razr 2019!

Motorola Razr 2019 looks almost the same as its predecessor, which has become one of the best-selling phones in history. Will the new model repeat the success? It is difficult to judge, even because of the fairly high price - but remember that the iconic V3 was also not the cheapest in its time.

I really like how the creation of the new Razr was modeled on the historical model. The housing has a very similar shape and proportions, and when viewed from the side - the similarity strikes even more. The difference is the screen: after opening the housing we see a large, half-height bent pOLED screen with a diagonal of 6.2 inches, a 21: 9 aspect ratio and a resolution of 876x2142 pixels. It is a pity that there is no longer a beautiful metallic keyboard - but I suspect that there will be an application mapping it on the screen. A classic fingerprint reader is located under the display, on a characteristic beard. In turn, on the outside of the flap, an auxiliary, external Quick View gOLED screen with a 2.7-inch diameter and a resolution of 800x600 pixels was mounted. Above it, in a light bulge, a single 16-megapixel camera with f/1.7 lens was mounted. The second camera, 5 Mpx f/2.0 for selfie, can be found above the screen, in a small notch - right next to the speaker of the handset. Interestingly, applications running on a smaller, external screen, after opening the housing are transferred to the internal - therefore a solution similar to that known from Galaxy Fold was used.

Although Motorola Razr 2019 is a show of Motorola's technological and design capabilities, it is not a flagship at all. Here, more than power, style was emphasized. And that's good, because the design is really unique, and its interior, although not entirely flagship, is strong enough to ensure the device's smooth operation. What can we find there? Snapdragon 710, supported by 6 GB of RAM and 128 GB internal memory. The power supply is provided by a 2510 mAh battery with a 15 W power supply. Unfortunately, apparently the larger one would not fit in a housing that is not only divided, but it must still be flat so that the RAZR remains worthy of its name. There is also a minijack, but Denon USB-C headphones will be added to the set.

The smartphone supports the eSIM card (the classic is not mentioned), it also has LTE, Bluetooth 5.0, dual band Wi-Fi and NFC. The interior of the phone is protected by a nanocoating providing resistance to splashing, and the weight of the device is 205 g. The assembled phone has dimensions of 72x94x14 mm, and when opened - 72x172x6.9 mm. I leave the worst at the end. Motorola Razr 2019 will cost $ 1,500. For now, it will be available only on the American network Verizon, and its wider distribution is expected at the beginning of next year. Orders can be placed from December 26, and stores will be available from January 6.