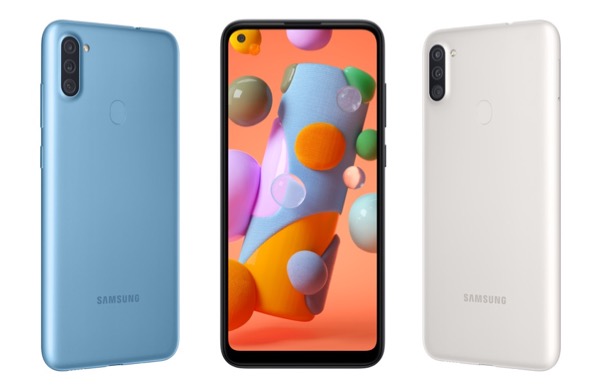 Samsung officially presented - though without major fanfare - the Galaxy A11 model. As the marking suggests, we are dealing with a budget model, but equipped with a solid battery.

The Samsung Galaxy A11 battery has a capacity of 4000 mAh and a quick charge of 15 W, and looking at the rest of the specifications, hopes for a long time of operation are unlikely to be futile. The smartphone has a 6.4-inch display with a resolution of 1560x720 pixels with a hole for an 8-megapixel selfie camera with f/2.0 aperture. The rear camera is triple, with a 13-megapixel main matrix and f/1.8 lens, a 5-megapixel f/2.2 wide-angle camera and a 2-megapixel background blur with an f/2.4 aperture.

The heart of the phone is an indefinite eight-core processor with a clock speed of 1.8 GHz, supported by 2 or 3 GB of RAM and 32 GB of flash memory. The equipment is completed with a fingerprint reader and a microSD card slot. The plastic housing will come in four colour variants. The price is not given, but it should not be too high...