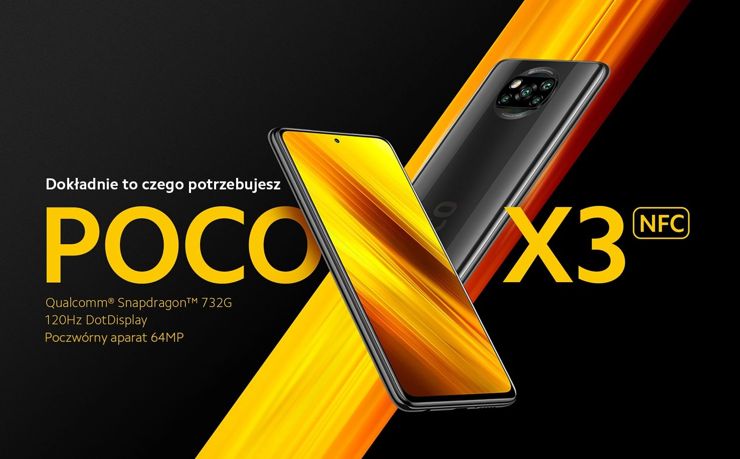 The POCO brand keeps its shape: It has just presented POCO X3, which has a lot to do with the market hit. How much does it cost and what does it offer?

Display with a small hole

POCO X3 has a flat Full HD+ display with a diagonal of 6.67 and an image refresh rate of 120 Hz. Of course, image refreshment is variable depending on the content watched - to save energy. The touch panel is refreshed at a frequency of 240 Hz. The screen is protected by Gorilla Glass 5.

The heart of the smartphone is the new Snapdragon 732G processor (8x Kryo 470 + Adreno 618). The processor works with LPDDR4x RAM (up to 6 GB) and UFS 2.1 flash up to 128 GB, of course with the option of using a microSD card. The LiquidCool Technology 1.0 Plus cooling system, consisting of a large copper tube and several graphite layers, is able to lower the processor temperature by up to 6 degrees. In addition, POCO will offer two cooling covers, prepared by gaming specialists from BlackShark.

The 20-megapixel selfie camera (f/2.2) is placed in a screen hole with a diameter of only 3.8 mm, and the rear camera is quadruple. The main Sony IMX682 64 Mpx (f/1.89) matrix is accompanied by a 13 Mpx wide-angle module with a field of view of 119 degrees (f/2.2), and the set is completed by two 2-megapixel macro and background blur cameras (both f/2.4). The camera is equipped with a lot of additional options implemented by artificial intelligence. The most interesting of them is probably the possibility of changing day into night by modifying the sky image. Equally interesting are the colour filters - gold and cyberpunk.

NFC and a large battery

POCO X3 has also NFC (which is even expressed in the note next to the name!), as well as a minijack or an infrared remote control. All this is powered by a 5160 mAh battery with 33W fast charging. A suitable power supply will be included, and a full charge will take 65 minutes. Increased charging speed has been achieved through the use of Middle Middle Tab (MMT) technology. In classic batteries, electric current flows from the bottom of the module, filling it from the top, which results in a much slower charging rate. Middle Middle Tab (MMT) technology is based on an innovative method whereby the battery takes electrical current from the inside and distributes it simultaneously up and down the module. This allows for faster and more even charging while ensuring a longer battery life compared to traditional systems.

The smartphone received stereo speakers with a cleaning function so that they always sound without interference. To make it more fun, the software has a function for changing the voice while calling. POCO X3 uses Android 10 with MIUI12 overlay with POCO Launcher 2.0. The manufacturer promises 3-year update support. The fingerprint reader is placed on the side of the housing, and its back is distinguished by a large logotype visible from a distance. The smartphone will be offered in two colour versions, gray and blue. The inside of the housing is protected by a hydrophobic coating - IP53. The set will include a cover and a screen protector.