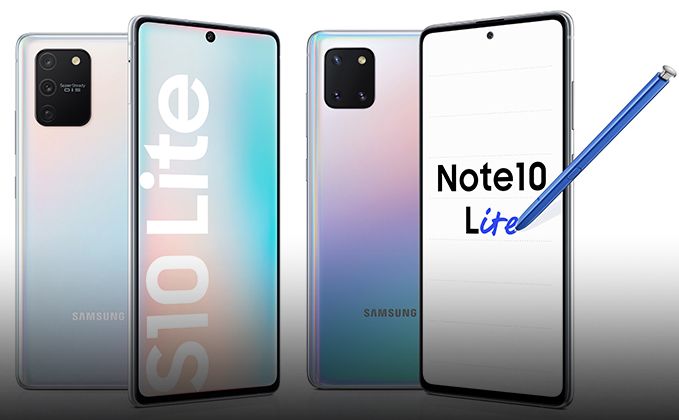 Samsung Galaxy S10 Lite is equipped with a 6.7-inch Super AMOLED Infinity-O screen - with a hole for a 32-megapixel selfie camera with f/2.2 aperture. On the back of the housing (covered with shiny plastic) we find a triple camera with a main 48 Mpx matrix equipped with Super Steady OIS optical stabilization and f/2.0 aperture. In addition to it, the smartphone has a 5-megapixel f/2.4 camera for macro and a 12-megapixel f/2.2 wide-angle camera with a field of view of 123 deg. The heart of Galaxy S10 Lite is Snapdragon 855, supported by 6 or 8 GB of RAM and 128 GB of memory inside. The 4500 mAh battery takes care of the power supply.

Samsung Galaxy Note 10 Lite is somewhat similar to Galaxy S10 Lite described earlier. It also has a 6.7-inch Full HD+ Super AMOLED screen, a 4500 mAh battery and 6/8 GB of RAM and 128 GB of data memory - but the processor is already Exynos 9810. You can’t forget about the iconic S-Pen stylus in Bluetooth LE and support of gestures performed in the air. You can, for example, control zoom and shutter in the camera or presentation or player. Galaxy Note 10 Lite also has a different camera - though it is a triple one. All three matrices are 12-megapixel, of course we have a set with f/2.2 wide-angle lens and tele f/2.4 with OIS. The main module also has OIS and f/1.7 aperture.

Both models share a similar styling - consistent with other Samsung models planned for this year and at the same time different from the flagship prototypes. The characteristic features of the new models are narrow-frame screens with openings and integrated fingerprint readers, as well as black, slightly protruding rectangular camera frames in the upper left corners of the rear wall. Samsung Galaxy S10 Lite will be offered in Prism White, Prism Black and Prism Blue, while Samsung Galaxy Note 10 Lite - in Aura Glow, Aura Black and Aura Red. Prices have not been determined yet, but we may get to know them during CES.