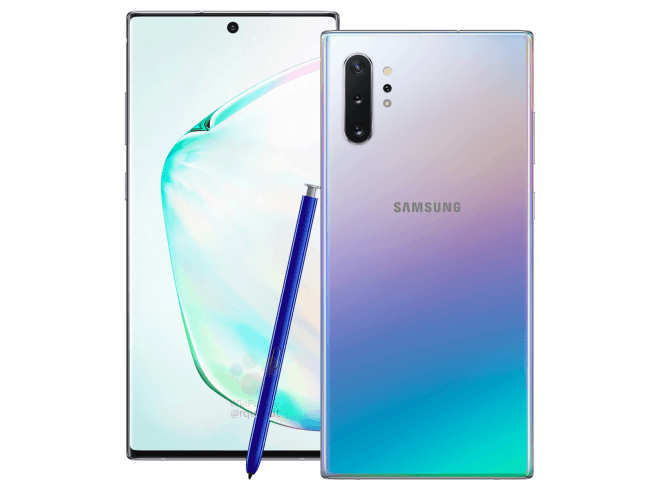 It's time to summarize all leaks about Samsung Galaxy Note10 and Note10+. Winfuture has collected all data - we have a complete set of information on both phones.

Samsung Galaxy Note 10 will receive a 6.3-inch Dynamic AMOLED Infinity O display with Gorilla Glass 6 with bent edges and an aspect ratio of 19: 9. Interestingly, according to Winfuture, the screen resolution is "only" Full HD+, which gives a 401 ppi. The screen will support HDR10+ and have an integrated ultrasonic fingerprint reader. The European variant Note10 is to have an Exynos 9825 processor, apparently being produced in 7 nm lithography. The system has two cores clocked at 2.7 GHz, two 2.4 GHz and four 1.4 GHz. The basic memory set is 8 GB LPDDR4x RAM and 256 GB UFS 3.0 - but there will be probably no microSD slot. A minijack will also be missing, but Dolby Atmos and AKG speakers will be there.

The front camera will go to a small hole in the screen - and it will have 10 megapixels, autofocus and f/2.2 aperture, and 4K movie recording. Galaxy Note 10 also has a triple back camera - with a main 12-megapixel sensor and a variable-iris lens - f/1.5-1.8-2.4. Next, there will be a telephoto f/2.1 with a double zoom (12 Mpx) and a wide-angle lens f/2.2 (16 Mpx). The maximum filming resolution is 4K at 60 fps. The power supply is to be answered by a rather modest 3500 mAh battery with fast 25 W charging (12 W wireless), and the equipment will be completed by: face recognition system, DualSIM and a new S Pen that senses 4096 degrees and gestures above the screen - AirActions. Everything will go to a watertight housing (IP68) size 151x71,8x7,9 mm and will weigh 167 g.

Samsung Galaxy Note 10+ will share a large part of the specification with Note10, but there will also be a few differences. The first one is the dimensions: 162,3x77,1x7,9 mm at a weight of 198 g. This should not come as a surprise, as Note 10+ has a larger, 6.8-inch screen - thankfully with WQHD resolution and 498 ppi density. It also has a larger battery - 4300 mAh with fast 45 W charging (20 W wireless). However, it is still uncertain whether a suitable power supply unit or an ordinary 25 watt will be included in the set. Note 10+ has more memory at the start than the younger brother - 12 GB of LPDDR4x RAM, it also is to get a microSD slot. The change is also in the back camera - it has an additional Time Of Flight sensor.

Both models are to be presented on August 7, and to be sold on August 23. It is not known, however, whether the 5G versions will hit the market at the same time or later. Evan Blass (or @evleaks) reports that the 5G version will certainly be available in the USA, in the Verizon network there. In the pre-sale, for each purchased Galaxy Note10 + 5G to be added for free Note10:

Verizon's advert (which will appear probably on August 7)
photo: @evleaks